Located in the heart of Washington County, our community is nestled within a quiet, safe neighborhood. Whether your loved one is moving in from Lake Oswego, Portland, Tigard, or anywhere else, your loved one will feel right at home at Washington Gardens.

Access to caring staff is where the value truly lies in senior living. Residents living in memory care units receive extra help with many different tasks from specialized caregivers. These hospitality and healthcare staff members monitor residents' well-being and help keep them healthy.

These services are robust. They include everything from convenient access to skilled nursing to activities of daily living (ADLs) whatever is necessary to maintain a safe and secure living environment.

Your loved one will experience SPARK for themselves when they participate in a variety of sensory activities. Some days, that includes creating art in a class environment, other times its baking and cooking lessons, or perhaps one of our instructor-led musical programs.

Help with Activities of Daily Living

The best way to get to know a community is by scheduling a tour. See the facilities, meet the staff and residents, and get a feel first hand what it's like to live at Washington Gardens Memory Care Memory Care. 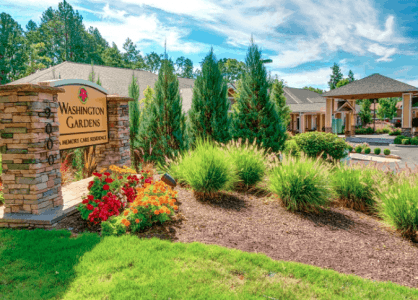 My father-in-law resided at Washington Gardens Memory Care from January 2015 through October 2016. We chose Washington Gardens because it was new, clean, had large private rooms, and seemed well-designed. Soon after we moved my father-in-law in, the executive director left and the office manager was promoted to that position. Throughout our time at Washington Gardens the office manager, turned new executive director, exhibited incompetence combined with a shocking lack of understanding about dementia, which trickled down to the entire organization. For example, repetitive behaviors are a very common part of dementia; my father-in-law began clapping loudly. Although annoying, it was not harming anyone. Rather than addressing the clapping, Washington Gardens claimed the behavior was unmanageable and threatened to kick him out if we, the family, didn’t figure out a solution. We provided several easy, common sense solutions and the problem was dealt with. Washington Gardens staff should have been able to come up with solutions and manage this on their own. This is only one of many examples of an instance in which administrative staff was incompetent, unhelpful, and threatening. On several occasions when I was visiting I found prescription pills lying on tables, couches, or the floor that patients or the med aides had dropped. This is obviously a significant risk, both to the patients who were clearly not receiving their medication, and to the other residents who could have easily found and taken it. There is no reason for this to ever happen; that I found pills lying around multiple times is inexcusable and extremely dangerous. On one occasion when I was at the facility another resident was wandering the hall covered in feces; it was very obvious by the smell and sight. It was not addressed and she was left to wander. After approximately 10-15 minutes I went to find a staff member to clean her up but could not find anyone. Staff/caregivers not being present on the floor was a recurring problem. When they were present, they at times could be found chatting together away from the residents or looking at their phones. Caregivers made very little effort to engage my father-in-law in activities. He received bare minimum care, and staff did not at all seem to know or like him. This was a stark contrast to his previous facility, where he was clearly well-known and well-liked. As his disease progressed my father-in-law often wet his bed. We brought this up repeatedly with the Washington Gardens executive director, director of the care staff and the caregivers. Over and over again we went to visit and found him sitting in soiled clothing, and his bed made even though it was soaked in urine. Staff did not check his bed in the morning to see if bedding needed to be changed, and put him to bed at night in urine-soaked sheets unless we were there to check. Family is to be notified of health issues, and especially of any need for hospital visits. My father-in-law was sent via ambulance to the emergency room, though we had no notification that there were any significant problems leading up to this. We were not notified until half an hour after he arrived at the hospital. Several hours after arriving at the ER he died. After his sudden death we had to contact Washington Gardens regarding an unresolved financial matter. Despite the executive director's claim that the issue would be resolved within a week or so, more than a month later we had not heard from them. There are good, caring, clean, safe memory care facilities in the Portland area. Washington Gardens is not one of them and should be avoided at all costs.

Was review this helpful? 0 PEOPLE HAVE FOUND THIS HELPFUL
Yes

5 Reviews & Ratings From Around the Web

Enter your email address below to get more information about Washington Gardens Memory Care.

Other Senior Living in Tigard, OR

Get Pricing & Availability for